Good St. Patrick - how about a repeat performance? 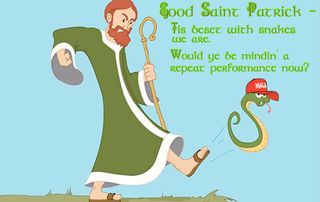 Legend tells us that it was Saint Patrick who drove the snakes from the Emerald Isle. Pundits have pontificated that snakes in the St. Paddy legend represent Evil. Fine and dandy - let's go with that. Now let's talk about the big island where I was born and grew up.

It's not really an island in the geographical sense. But it certainly is in the minds of a significant portion of the populace. In fact, in the minds of most of the members of a certain elephantine political party, it's a walled island - or will be as soon as they can skim a few billion in taxpayer money. But I digress.

The fact is, the island of my birth is today beset by snakes — snakes of a singularly malevolent character. So I'm dedicating this post to St. Patrick. It collects various St. Patrick's Day goodies I have created over several years all in one place, and it introduces a brand new St. Paddy's Day song. If you, like me, would like the Good Saint to stage a repeat performance and drive the snakes away from the Red, White, and Blue Isle, you've come to the right place! Stream the songs. Play the videos. Share this page and encourage others to do likewise. Think of it as a 21st century censer, and all those streams and plays as fragrant, Guinness-scented puffs of incense drifting into the ether in the direction of good Saint Patrick and beseeching him -

All right, me buckos, let us get with the program! 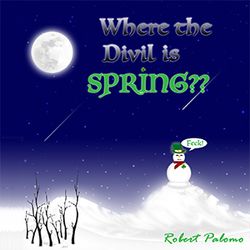 The song idea came into my head back in 2013 after a Facebook post in which I wrote "It may be warming globally, but it's FREEZING locally!" Saint Patrick's Day that year dawned at around -20 Celsius in Saint Petersburg. No end to winter in sight, global warming notwithstanding. 2019 is shaping up no better and it's GETTING OLD!

I found this a slightly raunchy comic tune, sung with a horrible pseudo Chicago-Irish accent, lurking in my back catalog of recorded but unreleased songs. I dusted it off, mastered it, and got it ready to launch in St. Paddy's honor for his saint's day 2019, to encourage him to do an encore on the island where the descendants of so many of his countrymen live today.

P.S. Especially for my American compatriots who may have some misgivings about the word "FECK!" used extensively in this song. It doesn't mean what your prurient mind is thinking it means, and it is not considered a no-no word in Ireland. Just so you know.

FREE DIGITAL DOWNLOAD — ALL DAY ON ST. PATRICK'S DAY!
GET IT ON BANDCAMP

There be PIRATES too!

In hopes that the Good Saint might give a thought (and a boot) to the pirates that today beset us as well as the snakes, I offer up a ballad I wrote about Ireland's cruelest pirate. The inspiration comes straight out of alternative history.

This dastardly marauder was an orange-haired pirate who was proud of his big "shillelagh", who abused women, who wreaked havoc among travelers from many nations, and who sank perfectly sound ships for fun and profit, aided and abetted by a corrupt and soulless congr... er... sorry... I mean crew. His preferred weapon was a big blackthorn shillelagh, with which he terrorized the high seas until one fateful day when he met a man whose shillelagh was bigger than his.

Children, learn a life lesson - the lesson of Shillelagh O'Toole!

DO PLAY THE VIDEO!

Not Irish? No excuse!

If you're thinking that all your streams and plays will never reach good Saint Paddy because you're not Irish, or you have no Irish blood - BLARNEY! On St. Patrick's day, "folk the whole world over are Irish for a day"! So come on - don something green, join the party, invite your family and friends and let's send some good vibes heavenward - bedad!

You don't need that first drop of Irish blood in you to enjoy this one all year round. Even if you're pure County Cork you're sure to get a tickle. More than a few drops of good Irish beer is a recommended accompaniment for all and sundry... assumin' they be of legal age, o'course, Officer!

FREE DIGITAL DOWNLOAD — ALL DAY ON ST. PATRICK'S DAY!
GET IT ON BANDCAMP

It takes hundreds of plays on streaming services like Spotify to equal the income from just 1 digital download. Even if you prefer streaming, downloads are a great way to support an artist whose music you enjoy.

WAYS YOU CAN SUPPORT MY WORK