So how did a child of Cold War era US heartland end up living in Russia? "The answer is more for a book than a bio," he says. "It has to do with meeting an exotic lady from Saint-Petersburg, falling in love at a time when such a thing was totally impossible, and eventually flitting off to a part of the world where I never could have dreamed I’d ever set foot." 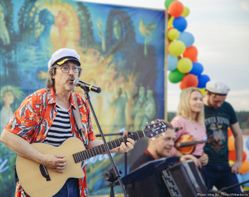 But set foot he did back in 1996, planning to stay for only one year and then return to the States. "We were living in the US and my step-daughters were starting to lose their native Russian. We wanted them to grow up bilingual, my wife had a job waiting for her in Petersburg, so I took a sabbatical and we went." After 25 years he’s still living there. "Robert Burns was right about best laid plans," he grins. "And yes, the kids did grow up bilingual!"

For his original songs, Robert draws from American traditional music he heard as a child in his mother’s native Missouri Ozark mountains, from his father's Spanish heritage, from his classical conservatory education, and of course from his experience as an expatriate. His writing and arranging can sometimes reflect his penchant for the humble, oft-maligned banjo, but it is in fact just one of half a dozen instruments he plays. "It’s an added sonic texture to be used whenever it seems right. If I use it, I try to do it in unexpected ways. Rather than play yet another rendition of 'Dueling Banjos' I’ll do something like clawhammer-style banjo on a sea shanty like Drunken Sailor."

Sucked In By The Sea

For many years Robert was, in his own words, "a closet songwriter". After many many moons of "just playing the music folks want to hear with their beer", he decided to begin recording and sharing the original songs he had just squirreled away, with acoustic music fans around the world via the internet. He was just getting a good start on that project when something unexpected happened. 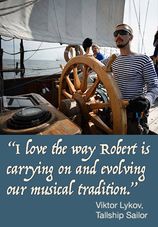 In 2014, he was invited to add his banjo, guitar and vocal skills to Saint Petersburg's "Shanty Choir Tallship MIR", a sort of semi-official musical group for the Russian tall sailing ship STS Mir, and made up of volunteer musicians from five countries aiming to bridge barriers between people through fun with music. Almost immediately he discovered a previously unsuspected talent: writing what he terms "new old sea songs" - shanties, forebitters, ballads and drinking songs with influences from the traditional classics.

"Talk about getting sidetracked!" he says. "I was totally focused on recording tunes in various genres that I’d written and put by for decades, but these sea songs just kept coming out. And they’re such fun - you can really get sucked in. Maritime songs were a very social thing. There was no 'audience' - everyone got into the act and sang together. We’ve largely lost that today, and I enjoy helping folks rediscover how much fun can they can have with this music."

Robert’s shanty choir bandmate , Viktor Lykov, has crewed professionally on tall ships, and still does on occasion. "I love the way Robert is carrying on and evolving our musical tradition,"  Lykov says. "Not since the great Stan Rogers have I heard anything like this outpouring of fresh new salty songs. Robert’s 'new old' maritime folk music really deserves to find an audience among the sailors of today and tomorrow."

What does he like most about maritime folk music? "Well, graybeard geezers like me get to roar out old sea songs, use salt-encrusted language, swill beer and rum, all the while dressed up in sailor costumes, and nobody thinks it's time to put gramps in a care home."

The link below downloads a 34 Mb. Zip archive containing:

Please contact me directly for any information you may need.