I'm not known for my renditions of traditional sea shanties and songs. In fact, some may doubt that I even know any. Some time ago I laid down some tracks for the classic traditional shanty Bound for the Rio Grande. Then I forgot about them until a couple of weeks ago. I found that they weren't the worst I'd ever recorded. So I've mixed, mastered, and launched this new recording down the ways. 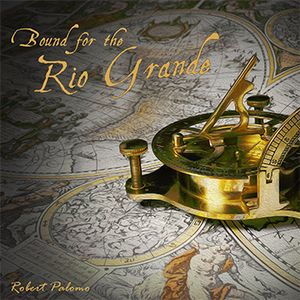 According to my English shantymate Peter, this is a traditional windlass and capstan shanty that was one of the most popular of shanties on British merchant ships when leaving port and pulling up the anchor. Not surprisingly therefore, the traditional words are about saying goodbye. Departure was a big deal back in those days, because the chances of a sailor not returning were much greater.

Like most traditional songs, there are variations on both the the words and the melody floating around. I've stayed with the melody that I've heard most often recorded and sung at festivals. As for the lyrics, maybe it was due to the long dark northern winter "blahs", but I decided to start with a couple of traditional verses, and follow with some of my own (which nonetheless borrow snatches from traditional verses I've heard sung), to make the song a circular story. That is, not merely the uncertainty of leaving, but also the joy of sea voyaging, and the hope of returning.  Yes, I have taken artistic liberties. I hope King Neptune will be Ok with it.

Fair Warning!
Both Banjo and Accordion (actually Concertina) are present in this recording!

The musical arrangement is deliberately "schmaltzy". You are welcome to make cow-milking gestures while listening to it.

P.S. In case you are wondering, the Rio Grande in this song is not the one along the US-Mexico border, but rather a port in the most southerly state of Brazil, which was and still is an important sea trading port.